It was a blistering hot day in Philadelphia as the newly formed Graffito Works dance had its launch at Shofuso Japanese House and Garden in Fairmount Park. This new dance platform is the brainchild of Steven Weisz, founder of PhiladelphiaDANCE.org. Weisz, who has managed several “traditional” dance companies in the past, has taken a new direction with a business model that is self-sustaining, compensates its dancers, generates audiences and revenue for its chosen venues, and provides exposure and branding for its sponsors. Working with museums, gardens, and public spaces with built-in audiences, he obtains funds from corporate donors, and then brings together professional dancers to perform mostly improvisational works inspired by the settings in which they’re dancing.

After a brief introduction by Weisz, movers Asimina Chremos and Loren Groenendaal began their methodical and undulating movements while lying on the steps adjacent to the pond as the Shofuso koi fish did their own dance in the background. Their bodies juxtaposed to the water and the fish blended as one. Meanwhile, looking out across the pond from the steps, dancers Jenny Sawyer, Marion Ramierez and Megan Mazrick began their movements on a bed of pine needles blanketed between several large trees. They randomly appeared and disappeared in to the landscape. 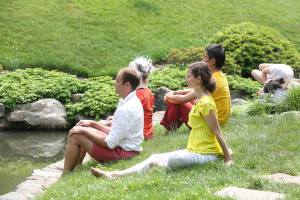 As improvisation musician, Julius Masri began playing on a steel lap guitar from one corner of the Japanese house, Beau Hancock and JungWoong Kim appeared on the rocks edge flanking the water and directly to an on looking audience sitting on the porch of the house. Kim had been tasked as the project coordinator for this performance, setting the structure or “score” for the improvisation. They are eventually joined by all the dancers, working in trios and duets with movement that is both meditative yet playful. At times, they are “audience like”, gazing out and reflecting on the beauty of the grounds, then simultaneously switching to movement that mimicked a child discovering nature as Ramirez and Sawyer playful skipped through the space. A brief solo by Groenendaal off to one side captured our imaginations as her arm movements blended with the landscapes in the background.

On cue, the dancers moved towards a large and sharply slopped hill adjacent to the house. Here they appeared and disappeared magically over the horizon. As they quickly came over the hill, they landed and slid, rolled and fell flat on the grassy slopes. At times, caught up in their own playfulness, laughter would ensue and the audience joined with them. It made us recall the times as kids and the fun we had rolling fearlessly down hills. Over and over they would roll, climb back up the hill and vanish in to the landscape. Then one by one the moved off across the horizon to the waterfall.

Here seemingly exhausted from their antics in the heat, they paused to refresh in the water, cool down and regain their composure. The stillness of the movement against the Japanese pagoda and rock waterfall was reminiscent of an impressionist painting. Occasionally a dancer would scoop their hands in the water and allow it to gently cascade upon them. While blowing in to leaves and making whistling noises, the dancers one by one began to make their way around the entire perimeter of Shofuso. At times their colorful costumes would dramatically appear among the landscape and then blend back in to the background. They eventually made their way to a wooden bridge that crossed to small island with a single bonsai like tree.

Each dancer approached the bridge in a unique way. Sawyer stopped, leaning over the edge with a sweep of her arm and seeming to direct the movement of the koi fish below before making the final crossing. All of the dancers gathered on the island, at times resting on the rocks and then moving in pairs with different facings until joined by more and more of the group. All together they moved and paused in different directions of the island until coming to their final resting place.

In those final reflective moments, Graffito Works had captured the beauty, spirit and gentleness that is Shofuso. [Shofuso Japanese House and Garden, Horticultural and Lansdowne Drives] June 14, 2015; japanesehouse.org.